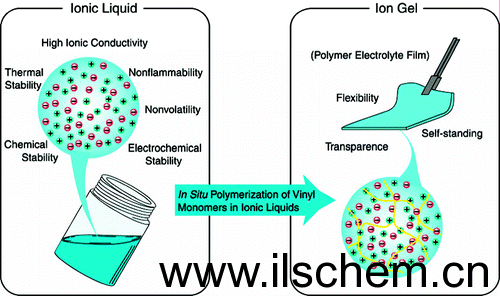 To realize polymer electrolytes with high ionic conductivity, we exploited the high ionic conductivity of an ionic liquid. In situ free radical polymerization of compatible vinyl monomers in a room temperature ionic liquid, 1-ethyl-3-methyl imidazolium bis(trifluoromethane sulfonyl)imide (EMITFSI), afforded a novel series of polymer electrolytes. Polymer gels obtained by the polymerization of methyl methacrylate (MMA) in EMITFSI in the presence of a small amount of a cross-linker gave self-standing, flexible, and transparent films. The glass transition temperatures of the gels, which we named “ion gels”, decreased with increasing mole fraction of EMITFSI and behaved as a completely compatible binary system of poly(methyl methacrylate) (PMMA) and EMITFSI. The temperature dependence of the ionic conductivity of the ion gels followed the Vogel−Tamman−Fulcher (VTF) equation, and the ionic conductivity at ambient temperature reached a value close to 10-2 S cm-1. Similarly to the behavior of the ionic liquid, the cation in the ion gels diffused faster than the anion. The number of carrier ions, calculated from the Nernst−Einstein equation, was found to increase for an ion gel from the corresponding value for the ionic liquid itself. The cation transference number increased with decreasing EMITFSI concentration due to interaction between the PMMA matrix and the TFSI- anion, which prohibited the formation of ion clusters or associates, as was the case for the ionic liquid itself.