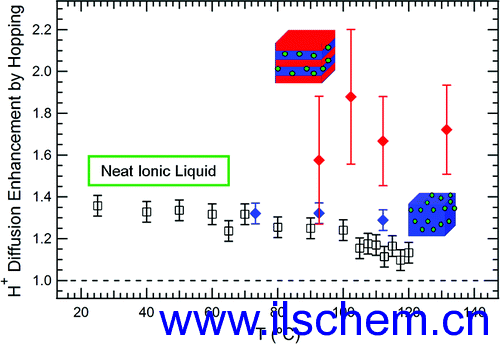 Nanostructured membranes containing structural and proton-conducting domains are of great interest for a wide range of applications requiring high conductivity coupled to high thermal stability. Understanding the effect of nanodomain confinement on proton-conducting properties in such materials is essential for designing new, improved membranes. This relationship has been investigated for a lamellae-forming mixture of poly(styrene-b-2-vinyl pyridine) (PS-b-P2VP) with ionic liquid composed of imidazole and bis(trifluoromethylsulfonyl)imide, where the ionic liquid selectively resides in the P2VP domains of the block copolymer. Quasi-elastic neutron scattering and NMR diffusion measurements reveal increased prevalence of a fast proton hopping transport mechanism, which we hypothesize is due to changes in the hydrogen bond structure of the ionic liquid under confinement. This, in combination with unique ion aggregation behavior, leads to a lower activation energy for macroscopic ion transport compared with that in a mixture of ionic liquid with P2VP homopolymer. The proton transference number in both samples is significantly higher than that in the neat ionic liquid, which could be taken advantage of for applications such as proton exchange membrane fuel cells and actuators. These results portend the rational design of nanostructured membranes having improved mechanical properties and conductivity.